When I arrived in Dubai for the first time in late August 2008 I was a wet-behind-the-ears, travelphobic, inexperienced whelp who didn’t know a lot about the world outside the mighty walls of the UK; had I been any greener then there’s a good chance that someone would have started dealing me, or at least planted me in Safa park.

Before I arrived, I remember thinking that I could handle the August heat because I’d been on a beach holiday to Crete once before. When the plane landed at Terminal 1 I was wearing jeans, a jumper and a leather jacket. In August. Stepping off the plane, a breezeblock of heat pummelled into me like a hammer wielding leviathan smashing the breath out of my lungs. I thought that it must be the overheated turbines on the plane kicking out some serious excess warmth, but then I realised that the further I walked from the plane, the hotter it was getting. Holy shit. And so I waded through what felt like a quagmire in the pits of hell and almost shed tears of unadulterated joy when I felt the siren kiss of air con on my skin inside the terminal.

This was one of those seminal ‘This is what Dubai is really like’ moments that took place during the early weeks of my arrival. We’ve all probably had many similar ones. Walking wide eyed like slack jawed hicks through metallic forests of soaring skyscrapers, dicing with death on our first journeys in a Dubai taxi down Sheikh Zayed Road, the mind-melting frustration of opening an account with DEWA, or the merriment of the realisation that you can get just as drunk (if not more so) than you did in your country of origin, these are all formative ex-pat experiences. However, there is one moment that was followed by a series of similar moments spread out through the years, which really helped me to understand what a delightfully/horrifically bizarre and inexplicable merry-go-round I had jumped on.

It was my first visit to The Madinat. I had arranged to meet some colleagues at the main entrance to go and explore the labyrinthine grottoes, souks and bars (whilst hoping to get my first picture of myself with the Burj Al Arab in the background so that I could post a smug and self-satisfied profile pic on Facebook to my friends back home). The first epochal moment arrived when a matt-black Ferrari purred its way up the concourse like a panther after a couple of brandies and a Viagra. Now, coming from Portsmouth, my previous concept of a luxury car could loosely be defined as being one that was not on fire, stolen or a go-kart. But then black beauty pulled up, took my luxury sports car virginity, and began the process of my gradual systematic desensitisation to lavish automobiles. These days even the Batmobile parked outside Lidl’s would seem passé and garner little more than a disinterested shrug of acknowledgement. Yet, in that moment, I was in awe, and I hadn’t even realised that this tasty morsel was merely a hors d’oeuvres to the banquet of the bizarre, the exposition of the extravagant that I was about to be witness.

Out of the right hand window a man in Emirati garb lent out and started talking with somebody on the sidewalk. Local in a Ferrari – nothing extraordinary there. Then something happened that made me feel as if my perception and sanity were caving in on one another, giving up on reality and deciding to open their own surrealist art gallery, curated by Noel Fielding, in my brain. Of all the things you never expect to see coupled: a donkey on a paraglider, a bull in a supermarket a eunuch in a sperm bank, this was right up there with them.

Because out of the right hand window emerged a paw. A spotted, opulently marked paw. A big paw. Then another paw emerged. They were paws that could not have belonged to a dog, or a cat, or any number of any other generically predictable domesticated creatures. The markings were so distinct that the question of what organism was lurking within the Italian sports car should have been beyond doubt, but my mind would not allow me to accept the connection, to accede to the truth of what I was about to see and have indisputably proven. And then, as if some fanciful scene from a Roald Dahl novel come to life, the cheetah poked its head out of the window to have a look around and check out what was going on. 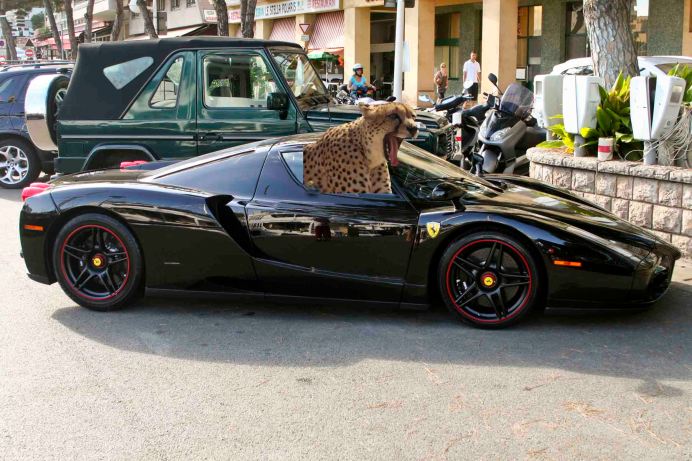 Probably disappointed at the lack of gazelles, zebras and ibexes, it immediately drew its head back inside the car and I was left to ponder a genuinely disturbing conundrum that seemed to hold the question of my mental health in a vice like grip.

Did I actually just see that?

Did I actually just see a cheetah riding in the passenger seat of a black Ferrari?

Or am I totally off my bloody head?

Just at that moment one of my friends arrived. I hesitated, afraid of articulating the idiocy of the aforementioned scene, but, gibbering moronically, I half said, half drooled ‘I think I just saw a cheetah in that Ferrari’. I was met with a look that spoke of straitjackets and padded walls. ‘Seriously. Unless I’m going nuts, I just saw a cheetah poke its head out of that Ferrari.’

I suppose you’re never really taught how to respond when a friend starts claiming that savannah cats that prowl the Serengeti have been transposed into luxury Italian sports cars driving around in the Middle-East. But, my friend gamely looked in the direction of the car, and in a moment that saved me from the eternal fracturing of my brittle cognitive stability, the cheetah poked its head out of the window again and had another scan to see if any delicious stray warthogs might be lurking behind the Hummer in front of them. It was real.

This established something of a pattern in Dubai, where – like Kanye West and Kim Kardashian – things that had no earthly purpose belonging together: a ski dome in a desert that regularly hit the 50 degree mark with women in hijabs careering down piste, painting otters living in a monolithic mall and a whale shark living in a ‘7 star’ hotel’, became normality. However, my brush with the wild side did not end there.

A few months later I was to see another cheetah – how clichéd – being walked around Jumeirah by a dish dash clad juvenile who could barely keep the beast under control as it bayed at the end of its chain every time another dull regular housecat ran out from underneath a car. My next encounter, despite having been warmed up on cheetah, still managed to leave me both more surprised than a naïve backpacker unsuspectingly undressing a Thai ladyboy, and also scare the living wits out of me.

After a few early morning sessions on the paddleboards by the Burj Al Arab, my wife and I realised that the earlier we went out, the better our chances were of seeing stingrays, turtles, or perhaps even the elusive dolphins that had become the stuff of legend amongst kayakers, dragon boaters and fellow paddle boarders. So, one sunny Friday morning, we headed down to Um Suqiem after a 5am wake up call, childishly excited about the prospect of seeing some aquatic creatures before they were scared off by jet skis and yachts. Little did we know that our lust for wildlife watching would be satiated, yet in a way that even as half-decaders in Dubai we could not have predicted.

As we passed the Burj and then Pierchic, our 5am wake up looked like it was doomed to produce negative results. No marine life. A priceless, gold-dust lie-in thrown away because of the hateful aquatic beasts that had deliberately failed to materialise just to irritate us. Not even a measly minnow had reared its fishy head, and I felt that nature had betrayed us. But then Dubai’s capacity for the unexpected kicked in; we, like a teenager searching for love by replying to messages scrawled on bathroom walls, had been looking in all the wrong places.

My wife uttered a plaintive ‘Look Richard’. It was an underwhelming tone that suggested that I would see little more than a battered old seagull pecking forlornly at an empty crisp packet. This couldn’t have been further from the truth.

I turned my head to look towards the little rocky pier that juts out at the far end of the beach at The Madinat. At first I wasn’t sure what I was looking at. I replied ‘That’s weird, has that guy on the pier got a massive inflatable tiger next to him?’ No sooner had the words escaped my mouth than the inflatable tiger had stood up imperiously on all fours and then turned its head ominously towards us. It was a bloody tiger. A real tiger. A massive, mighty royal Bengal tiger. And it was looking straight at us. At first, my inner child got the better of me and my head swarmed with memories of childhood stories about tigers befriending children and making teatime visits, so I started to paddle towards the beach bound beast for a better look at our soon-to-be new best friend. My wife, equally intrigued, followed.

As we edged slowly closer, the yellow brick fantasy land of childhood was shattered by reality; the tiger started to sniff at the air, as in the way tigers do when they have just caught the scent of something delicious, slow and eminently catchable. At this point, a recent visit to see the Life of Pi loomed like a vast shadow into my mind. I turned to my wife and spewed out a concoction of anxiety and terror ‘Can tigers swim? I mean Richard Parker can swim in the Life of Pi can’t he? But tigers can actually swim can’t they – in real life? Remember that place we read about in the Lonely Planet – in Bangladesh – the tigers swim in the sea don’t they? Do you think that one can?’ My wife, ever the voice of reason, told me we should just turn our boards around and start paddling as fast as humanly possibly. I didn’t need asking twice, turning and propelling myself forward as if I was trying to elude an oncoming tsunami. The irony is that we’d expected to see tigers when we were away in India and went on a tiger safari in Ranthambhore, only to be disappointed; when we finally got we wanted it was on a pier in the desert outside a five star hotel next to a beach restaurant where we had substituted safari jeeps for paddle boards, and it had almost caused us to soil our beach wear. Dubai.

Now I’m back in Germany, and even the Black Forest doesn’t contain the kind of ethereal surprises that even a Ferrari could produce in Dubai. Processions of dog walkers pass by in mundane uniformity with never a hint of a lion, honey badger or ocelot, and whilst the question of abominable animal rights and trafficking has gratefully been solved here, there is a small, tiny fraction of a percentage of me that wishes just once, for a second, that I could see a Bavarian in a Lederhosen stroking a leopard in a Maserati.