Gerrard Simply Doesn’t Deserve Praise For His Supposed Declaration Of Sorrow. So Why Are People Rushing To Give It To Him?

In case you missed it, in Sunday’s battle for fourth place between Liverpool and Manchester United, Steven Gerrard came off the bench at half-time with United leading 1-0 and Liverpool in dire need of some galvanising leadership and inspiration. He lasted 45 seconds before he received a red card for stamping on the ankle of a prone Ander Herrera. As you can see in the clip below, Herrera had contested a tackle with Gerrard but didn’t actually make any contact with his challenge. Therefore, Gerrard’s response was a malicious reaction to an entirely innocuous incident.

There was no malice, ill-intent or injury done to Gerrard, no sign of provocation. Despite this, Gerard took a second, looked at Herrera, cogitated, and decided to aim a clearly premeditated stamp at his ankle. It was a cowardly act from a player so often lauded for his guts and bravery, and an unfitting and anticlimactic ending to Gerrard’s involvement in one of British football’s most enduring rivalries.

However, (brevity of timing aside) there is nothing out of the ordinary with a combative midfielder getting sent off in a hotly contested derby; what is unusual is the ridiculous and unwarranted fawning, praise and positivity centered on Gerrard’s public apology that has followed his stamp. If you haven’t seen it already, here is what Gerrard had to say:

The majority of the tabloids have presented Gerrard’s apology as some laudable act of greatness, an indication of the true depth of his character; they have exonerated him for his rank stupidity, lack of professionalism and uncontrolled aggression because he said sorry. It’s quite interesting to compare and contrast the headlines following Diego Costa’s stamping (perpetrated by a dirty cheating foreigner naturally), and those that have followed Gerrard’s (undertaken by an English lion with uncontrollable passion):

There are two problems here. First, there is the myopia of the British press when it comes to condemning the actions of an English player, despite the damning evidence of the level of vindictive calculation in their misdemeanour. British – and especially English – players and managers seem to be viewed through rainbow coloured cataracts by a press who are quite happy to respond with rabid vitriol when the very same unsavoury antics of their own are undertaken by foreign players. What is condemned as scheming malice in foreign players who are ‘poisoning the game’, is written off as an over-spilling of passion in British players, because ‘they understand what it means’ to play in Premier League fixtures. 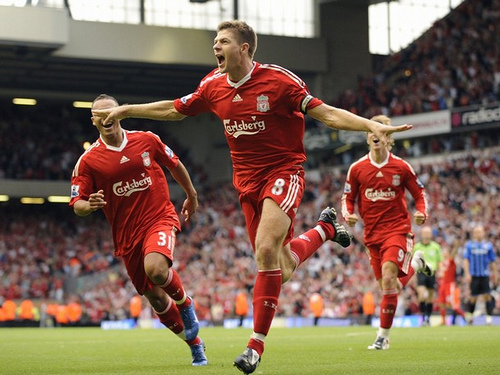 The second part of Gerrard’s apology that irks, is the backslapping that he has had for it. Look at it again. He’s sorry to Brendan Rogers. He’s sorry to his teammates. He’s sorry to his fans. In fact the only person it seems that he is not sorry to is the guy whose ankle he tried to break. Why do we jump to say ‘fair play’ just because Gerrard has apologised – especially when his act wasn’t an error or a mistake, but a very intentional one. He’s sorry because of what it has cost him, not sorry that he set out to injure someone whose career depends on the ability to use exactly the part of the body that Gerrard took aim at. He’s sorry that his team lost the match, that his reputation may be slightly tarnished, that he ‘s probably destroyed his team’s ambitions for the season in a big match for the second year in a row. So he’s not really sorry at all is he? 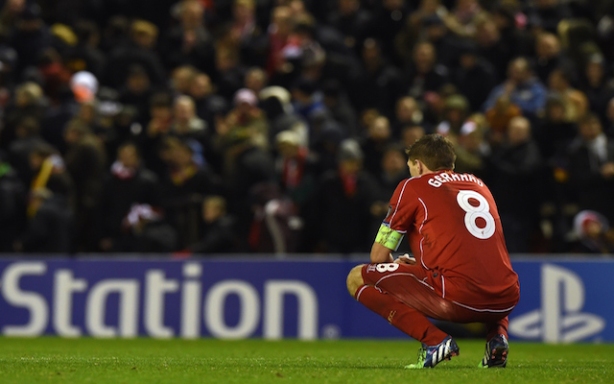 Also, Gerrard saying that he ‘takes full responsibility’ suggests that he believed that there may have been somebody else to blame for what happened. Who the hell else would be ‘responsible’ for moving his leg and boot in the direction of Herrera’s body? Gerrard set out to deliberately harm a fellow professional, and he expects us to believe that someone else may have been the instigator – perhaps Brendan Rogers directing him via a remote control after inserting a microchip into his spinal cord? An ‘Exorcist’ style possession of the limb and satanic guiding of it into a defenceless victim? An idiotic claim like this only goes to negate any sincerity in Gerrard’s apology and makes it look like he only issued it as an act of self-protection rather than any genuine sorrow or contrition.

Again, Gerrard is only sorry for Gerrard, and if he had really wanted to take responsibility or felt genuinely sorry then he wouldn’t have left the field shaking his head, wouldn’t have argued with the referee, and – worst of all – he wouldn’t have gesticulated that Herrera had gone down too easily in order to buy a card.

So call it passion, or call it thuggery, there is such a fine line between the two sometimes that we’d end up in an endless cycle of philosophising about attributable causality if we wanted to really know. Just don’t give Gerrard, or anybody else in his position praise or the sense that there is something noble in a hollow apology, or taking ‘responsibility’ when they clearly knew what they were doing all along. Praise should be given when somebody has actually done something good – like Juan Mata’s sumptuous winner – it shouldn’t be attributed to someone apologising for acting like a cretin.

One thought on “Steven Gerrard – British Lionheart Versus Foreigners”